Notable Locations of How to be a Werewolf[] 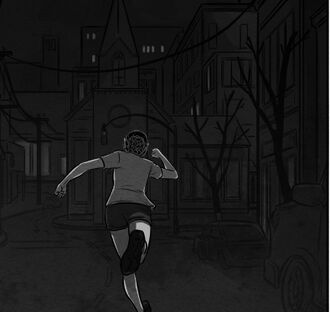 Crescent Lake is the backdrop for most of the story. Counted among its inhabitants are: Malaya Walters, Vincent Walters and their parents, Elliot and Maria Walters; Marin Grundy, Marisa Salcedo and Elias Ross share a home on the outskirts of town; and Connie Greensmith and her wolves used to live in a run-down house in the woods not far from the Walters' house.

This picturesque college town is located in southern Michigan, surrounded by woods, and it contains Crescent Lake University, a mall, and other typical small town places. At the very least, it has a quaint, well-run, roomy coffee shop that's popular with the college crowd. The town is based off of a minier version of Ann Arbor, Michigan.[1]

The mall is based off of the Somerset Collection in Troy, Michigan.[2] The mall includes stores like: Soap'n Stuff, Pretzel Kingdom, The Jeans Store, Frisky Business, and many other clothing stores. The address is 555 Mall Drive, Michigan.[3]

The lake which the town is named after is finally seen on Chapter 10 Page 616.

Crescent Lake University is a pillar of the Crescent Lake community, and the source of much of the town's revenue. The bulk of the coffee shop's customers are college students.

Maria Walters is a professor of Biology here, and Vincent Walters and his friend Joy attend classes here.

The Crescent Lake University Library is located on the campus grounds.

Vincent has a teacher named Professor Coletti who gives him an assignment to study Kirtland's warbler[4] that becomes the basis (read excuse) for Vincent and Elias's first date[5].

Vincent also plays for their baseball team, the Ospreys. [6]

The library is where Vincent first has a chance to talk to Elias and become better acquainted. It's also where Vincent and Joy meet in their study group.

Red Moon coffee shop & cafe has been managed and operated by Elliot Walters – and lately, his family – for over twenty years. He dreamed of running the shop since high school and worked around the clock for years to keep the store afloat. The shop has proved to be popular with the college crowd.

When Charlene Masters first came to Michigan from New Orleans, she took a job at Red Moon as a barista serving customers and helping with the cafe. She also does some of the baking, making scones and muffins.

Elias Ross recently took a job at working at the Red Moon. After he was expelled from Ross Pack for his part in taking Vincent back from Connie and her wolves, he needed to work to pay for living expenses. Malaya offered the job in gratitude for his help.

Malaya has worked at the coffee shop for longer than she can remember, and once she became a werewolf, it became one of two places she feels normal, the other being home. For her twentieth birthday, Malaya was made part owner of the coffee shop and cafe.

One of the other part time workers at the cafe is named Leslie.

The official layout of the street the cafe is on: the building to the left of Red Moon is a bookshop that goes to the street corner, which is long but not that deep .[7]

The aprons were originally green, but changed to red in Chapter 8 to better fit the name of the cafe.[8] A box labeled as "OLD APRONS" can be seen in the closet, possibly in reference to the previous green ones.[9]

The creepy house in the woods is where Flora Conradine, along with Ziva Ross, finally settled down after Flora gave birth to Aubrey while hiding from Tom's wrath[10]. When the other children were taken and turned by Ziva, they were brought here to be raised to serve Flora, now named Connie Greensmith, as living energy sources[11], and ended up being the only home they could remember[12].

The house is not far from Malaya's home, only a couple miles, as was discovered when Marisa, along with Malaya and Elias, used a tracking spell to find the source of the magic that was hiding werewolves in Crescent Lake[13].

The house was heavily warded making it nearly impossible for mere humans to find[14] and very difficult for witches and werewolves. The basement of this house is where Vincent and Elias were held after Vince was kidnapped and Eli was caught trying to save him. The basement is based off of a Michigan-style basement, where the floor is mostly earth.[15]

New Orleans is a historic town located on the Gulf of Mexico in the southern state of Louisiana, home to Marde Gras and Fat Tuesday and where plastic bead necklaces sell dearly. It is the town where Charlene grew up and where her parents still live: her father a jazz musician, and her mother a teacher[16]. Charlene left New Orleans, claiming she wanted to find out if winter was as bad as they said. In reality, she was following a premonition where Malaya was pretty hairy[17].

Community content is available under CC-BY-SA unless otherwise noted.
Advertisement